A friend mentioned that the diving events in the current (Glasgow) Commonwealth games are being held here at Edinburgh’s Commonwealth Pool. She was right: 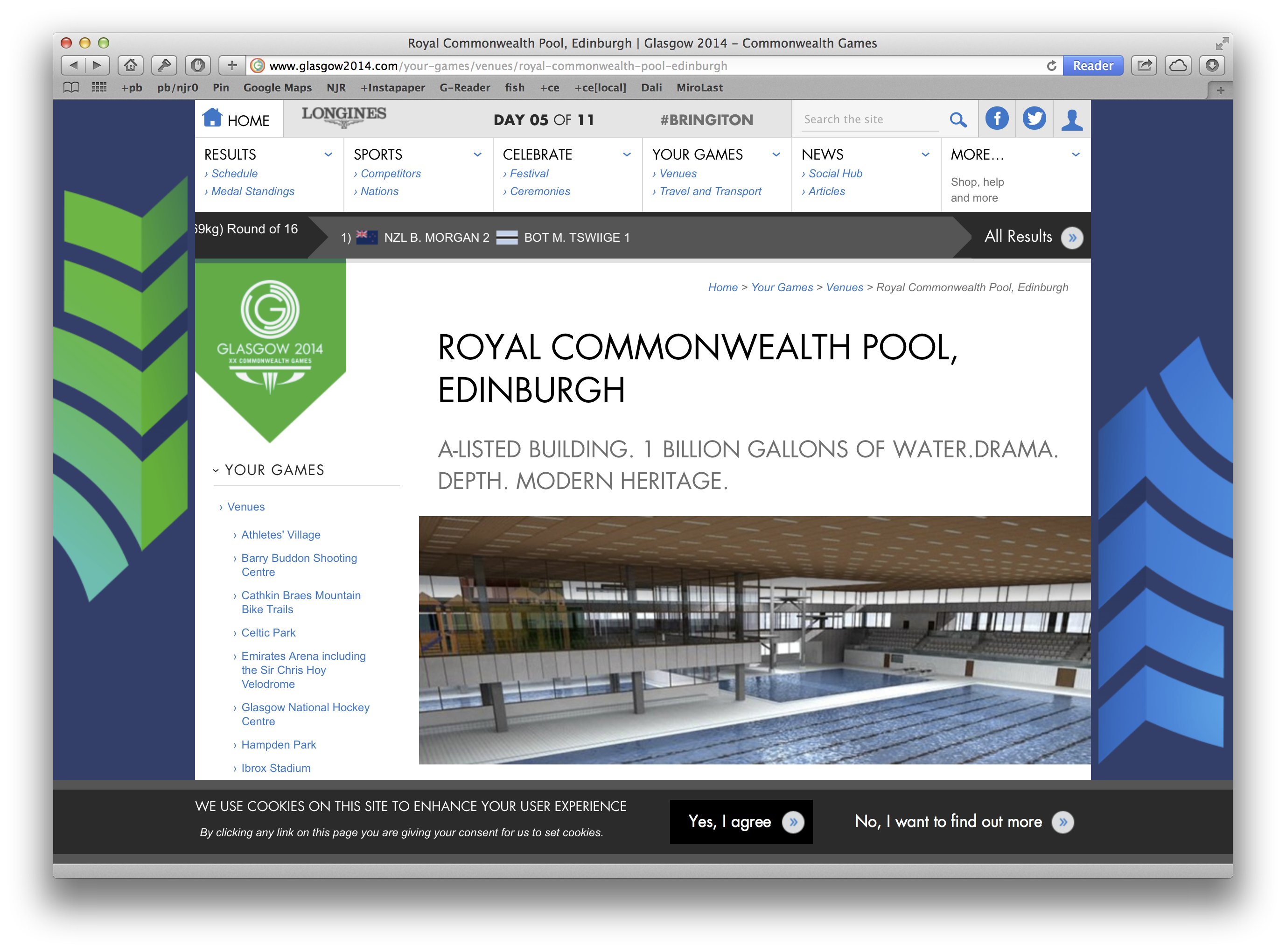 (That’s a screenshot from Glasgow 2014, which, with luck, will change soon.)

Trying slightly harder (and still not looking anything up) a gallon is 8 pints and there are about 1.75 (imperial) pints in a litre (or about 2, if we only care about orders of magnitude). So we need to divide that 2.5 million litres by something between 4 and 5 (8/1.75 = 4.57) which will give us something a little over half a million gallons.

So there not only aren’t a billion litres of water in the pool: there aren’t even a million by my estimate. The claim is out by 3 orders of magnitude.

Why do I care? Only because I think it’s important people develop a good sense of scale, and can spot when numbers are “obviously” wrong (even if sometimes “obviously” wrong numbers turn out to be correct). An excellent discipline physicists are often taught is

meaning that whenever you’re calculating anything you should first guess the answer (literally, just guess); then make a crude estimate by approximating the key components of the formula; then calculate the precise answer. The idea is that this leads you to first to develop better intuition about orders-of-magnitude sizes (by seeing when your guess is significantly off), but also helps you to avoid believing calculations that are orders of magnitude off, because the guessing and estimation stages lead you to be surprised by an answer that seems as if it can’t be right.

Ordinary people, quite reasonably, have no feeling at all for what a billion is, because in ordinary life you rarely if ever encounter such numbers in contexts where they can really be appreciated. Sure, people might know that the population of the Earth is about 7 billion, but you can’t see 7 billion people. Even more, people will hear about states and companies spending and earning quantities of currency measured in billions (or occasionally even trillions), but again, those are just abstract numbers. Even when there’s hyperinflation and prices begin to measured in millions or billions, the appreciation doesn’t really increase, because the million or billion just becomes a suffix.

If you don’t have a feel for a billion (and who really does?), my two favourite ways of getting some kind of handle on it are the following:

And so we come full circle. Because that 50m x 10m x 2m is not so far off the size of an Olympic swimming pool (too narrow, at 10m, but pretty similar otherwise). And it only contains a billion centimetre cubes. So even if you have no real sense of how big a gallon is, you probably know it’s orders of magnitude bigger than a 1cm cube.